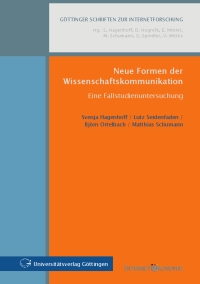 For some time massive change needs primarily by libraries and other public facilities for the system of science communication have been formulated against the background the so-called "serials crisis. Great potential for modifications are attributed to information and communication technologies, which seem suitable to allow the distribution of scientific results in cheaper and faster than with the since the end of the 17th Century's established channels of communication of paper-based journals. The current discussion of the changes focus in particular on the phrase "Open Access" with the two basic design options "Green Road" the parallel free online publication media, and the "Golden Road," the primary publishing in open access media. In practice, however, there are numerous, highly differentiated business models for new forms of originary publication services, as well as complementary services. Some of these new forms of science communication are already described in the literature, usually as case-by-case documentations. A helpful addition would be a study grid, which would allow a structured description of different forms of scientific communication. To establish such a typology is the goal of this book. This typology is then used to select new services to be described and then compared. Another aim of the book is so is to make a contribution to the systematic description of reality and thus to provide a basis for sound research.