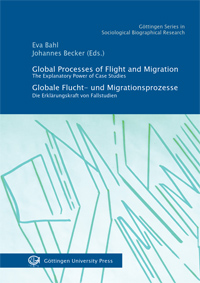 The explanatory power of case studies

The case studies in this volume illustrate the global dimension of flight and migration movements with a special focus on South-South migration. Thirteen chapters shed light on transcontinental or regional migration processes, as well as on long-term processes of arrival and questions of belonging. Flight and migration are social phenomena. They are embedded in individual, familial and collective histories on the level of nation states, regions, cities or we-groups. They are also closely tied up with changing border regimes and migration policies. The explanatory power of case studies stems from analyzing these complex interrelations. Case studies allow us to look at both “common” and “rare” migration phenomena, and to make systematic comparisons. On the basis of in-depth fieldwork, the authors in this volume challenge dichotomous distinctions between flight and migration, look at changing perspectives during processes of migration, consider those who stay, and counter political and media discourses which assume that Europe, or the Global North in general, is the pivot of international migration.