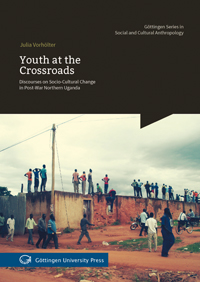 Youth at the crossroads

Based on eleven months of field work (2009-2011), this book analyzes the situation of youth in urban Gulu, Northern Uganda, in the aftermath of the war between the Lord’s Resistance Army and the Ugandan Government (1986-2006). Specifically, it focuses on the generation that was born and grew up during the 20-year war: How do members of this generation perceive and evaluate socio-cultural changes which occurred in Acholi society throughout the war years? How do they imagine their future society? And how do they react to the expectations directed at them by their elders? In order to answer these questions, the book draws on rich ethnographic material. It provides an in-depth analysis of how imaginations of the post-war society are contested and negotiated between different groups of social actors – youth and elders, men and women as well as local, national and international actors. While some try to re-establish former cultural practices and conventions and call for a ‘retraditionalization’ of Acholi society, others lobby for ‘modernization’ and attempt to establish ‘new’ social structures, values and norms which are strongly influenced by local understandings of ‘the Western culture’. The book presents numerous examples of the multiple and complex ways young people strategically position themselves in these debates and make use of the various discourses on culture, tradition and modernity in their negotiations of generational, gender, family, and peer-to-peer relations.