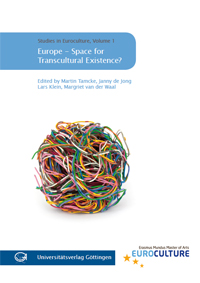 Europe - Space for Transcultural Existence? is the first volume of the new series, Studies in Euroculture, published by Göttingen University Press. The series derives its name from the Erasmus Mundus Master of Excellence Euroculture: Europe in the Wider World, a two year programme offered by a consortium of eight European universities in collaboration with four partner universities outside Europe. This master highlights regional, national and supranational dimensions of the European democratic development; mobility, migration and inter-, multi- and transculturality. The impact of culture is understood as an element of political and social development within Europe. The articles published here explore the field of Euroculture in its different elements: it includes topics such as cosmopolitanism, cultural memory and traumatic past(s), colonial heritage, democratization and Europeanization as well as the concept of (European) identity in various disciplinary contexts such as law and the social sciences. In which way have Europeanization and Globalization influenced life in Europe more specifically? To what extent have people in Europe turned ‘transcultural’? The ‘trans’ is understood as indicator of an overlapping mix of cultures that does not allow for the construction of sharp differentiations. It is explored in topics such as (im)migration and integration, as well as cultural products and lifestyle. The present economic crisis and debt crisis have led, as side-result, to a public attack on the open, cosmopolitan outlook of Europe. The values of the multicultural and civil society and the idea of a people’s Europe have become debatable. This volume offers food for thought and critical reflection.