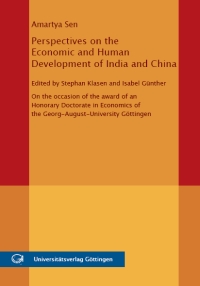 Amartya Sen: Perspectives on the Economic and Human Development of India and China

Published: 2006
Print out of stock
Softcover, DIN A5; 62 Pages
Digital

On July 7, 2005, the Faculty of Economics of the University of Göttingen awarded Nobel Prize winning economist Amartya Sen with an honorary doctorate in economics in recognition of his outstanding contributions to the fields of welfare and development economics. On the occasion of the award, Amartya Sen shared his thoughts on the economic development of India and China, with a focus on the longstanding interaction of the two societies. The lecture is complemented by a previous publication of Jean Drèze and Amartya Sen on comparative human development in India and China. This publication should greatly enrich the current debate on the economic development of India and China. Instead of viewing economic development in India and China mainly as a competitive threat, as is often done in Western media, he asks what these two large societies, comprising 40% of the world's population and more than half of the world's poor, can learn, and indeed have learnt from each other in terms of improving the lives of their citizens.