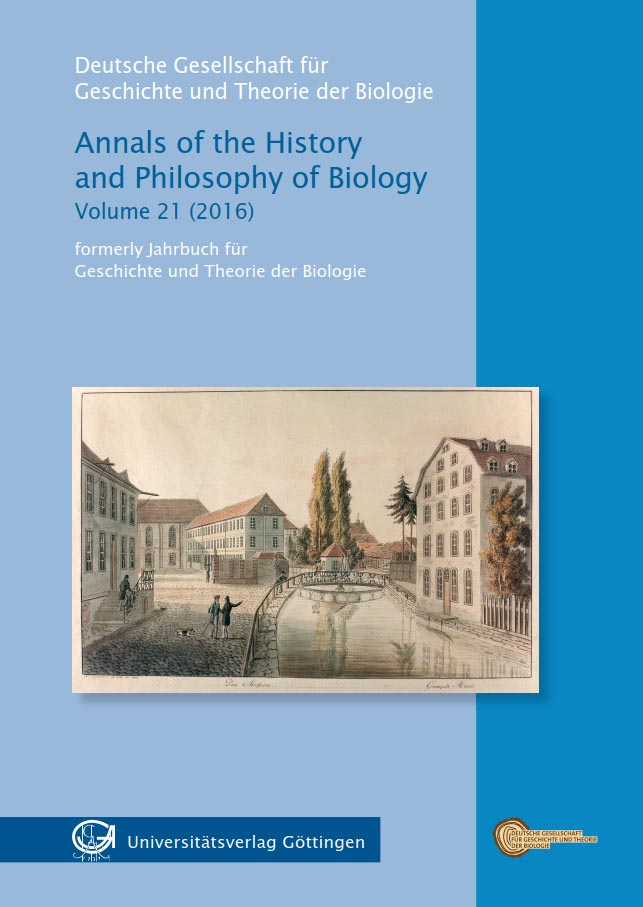 Annals of the History and Philosophy of Biology 21/2016

The name DGGTB (Deutsche Gesellschaft für Geschichte und Theorie der Biologie; German Society for the History and Philosophy of Biology) reﬂects recent history as well as German tradition. The Society is a relatively late addition to a series of German societies of science and medicine that began with the “Deutsche Gesellschaft für Geschichte der Medizin und der Naturwissenschaften”, founded in 1910 by Leipzig University’s Karl Sudhoff (1853-1938), who wrote: “We want to establish a ‘German’ society in order to gather German-speaking historians together in our special disciplines so that they form the core of an international society…”. Yet Sudhoff, at this time of burgeoning academic internationalism, was “quite willing” to accommodate the wishes of a number of founding members and “drop the word German in the title of the Society and have it merge with an international society”. The founding and naming of the Society at that time derived from a speciﬁ c set of historical circumstances, and the same was true some 80 years later when in 1991, in the wake of German reuniﬁcation, the “Deutsche Gesellschaft für Geschichte und Theorie der Biologie” was founded. From the start, the Society has been committed to bringing studies in the history and philosophy of biology to a wide audience, using for this purpose its Jahrbuch für Geschichte und Theorie der Biologie. Parallel to the Jahrbuch, the Verhandlungen zur Geschichte und Theorie der Biologie has become the by now traditional medium for the publication of papers delivered at the Society’s annual meetings. In 2005 the Jahrbuch was renamed Annals of the History and Philosophy of Biology, reﬂ ecting the Society’s internationalist aspirations in addressing comparative biology as a subject of historical and philosophical studies.